2020 has been a year for the record books in so many terrible ways. Some sorry excuse for a dog owner has given us one more reason to question the state of humanity. A big, beautiful dog with a front leg that was literally broken in two was found tied up. His human apparently left him there to fend for himself. Thankfully, a good samaritan saved the dog and improved our opinion of mankind.

Two-year-old Steve is a Lurcher, which Vet Street says is a mixed breed dog that is usually a “sighthound such as a Greyhound crossed with a terrier, herding breed, or large scenthound.” The breeds selected to create a Lurcher are chosen so that the resulting dog has such qualities as intelligence, tenacity, and a super keen sense of smell, often used to advantage in hunting.

Steve was found tied up to a lamppost at a bus stop in obvious agony and pain. Not only had he been abandoned by his human, which would be traumatizing to any dog, but Steve also had a front leg that was broken clear through in a complete fracture. A good samaritan saw the dog in such a state and did what any good person would do. He got help! He called Dogs Trust, a rescue organization, who responded right away. They took Steve to a nearby emergency vet for medical care. 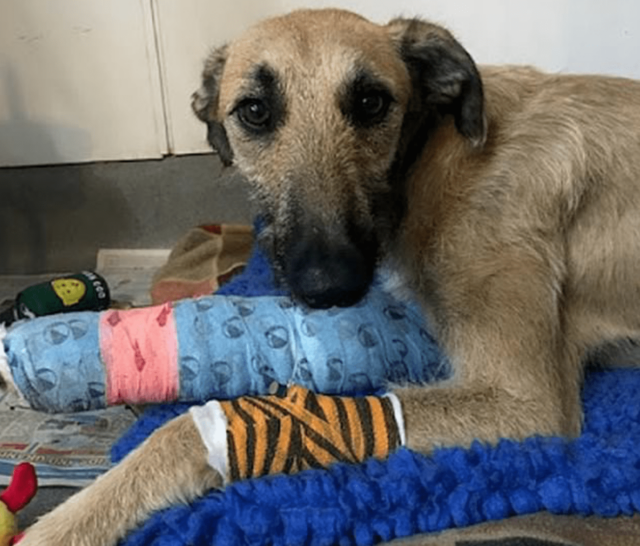 Steve Taken into Surgery and Recovery by RSPCA

Steve was transferred to an RSPCA hospital. He needed surgery to fix his front leg, which required pins to reconnect the completely separated bone segments. Steve made it through surgery and is recovering for a period of twelve weeks. The RSPCA staff are taking good care of him and will supervise his recovery, which they anticipate to happen fully.

RSPCA Inspector Grace Harris-Bridge told Daily Mail UK, “Poor Steve was in a huge amount of pain from his broken leg and was just left alone tied to a bus stop.” He added, “It’s absolutely heartbreaking to think someone just discarded him when he was so in need of help. My colleagues at Harmsworth Animal Hospital have also done an incredible job repairing his leg and treating him.”

Steve Will Find a New, More Worthy Family When He is Fully Healed

RSPCA has attempted to identify and locate Steve’s human but has been unable to do so. Steve is not microchipped. It is unfortunate that the “owner” will not have to answer for his actions but clearly, Steve will be much better off with a family who will keep him safe and cared for all of his remaining days.

St. Bernard Gets Stuck In Ditch For 18 Hours – Hero Dachshund Refuses To Let Him There