Eldad from Hope For Paws got a call about a stray Pitbull puppy living on the ramp of the freeway, and she was limping. He did not hesitate to head out to the location to rescue the dog. Once he arrived at the scene, he started to look for the pup and found her lying under a large flowering bush. As he got closer to the dog, he realized she was not a puppy but a scared and fierce dog. 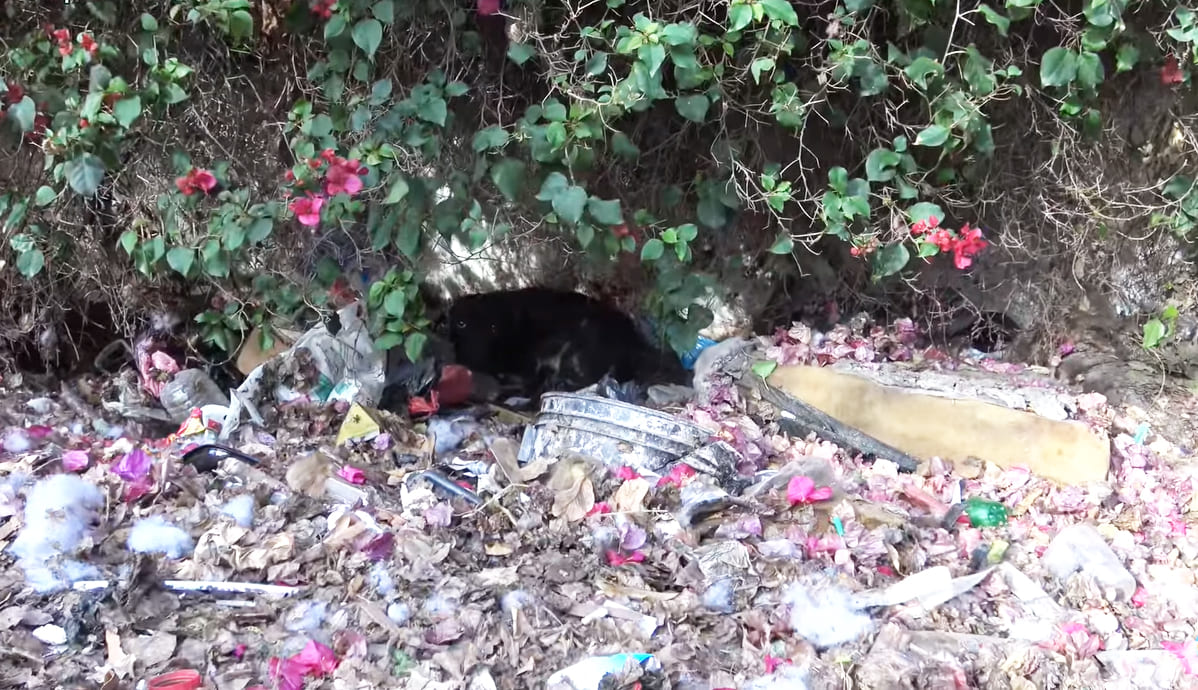 She intensely barked at him threatening he should not approach her or he might get in trouble. Eldad tried to calm her down, but she was so frightened and nervous keeping her defense. The rescuer attempted to offer her treats in order to get her out of the den. Since it was dangerous approaching her, he decided to use his gentle snare. It was not easy to place the snare around her neck, but finally, he could get her. Knowing that the dog was starving, the rescuer took advantage of it and lured her out by his food. It was not until the poor dog stepped out of the den that the rescuer realized her leg was so badly injured. She laboriously stepped one by one step and her foot was dragging because it was seriously broken.

He was still scared of touching her so he continued to earn her trust by preparing some water for her. Unfortunately, all his efforts were in vain because the dog chewed his snare and ran back to the den. The rescue had to start over again while Eldad was run out of food. He decided that he needed to be more firm to make this rescue mission successful. After all, Eldad could get the dog to step out again, but it was still a dangerous situation since he was just alone so he called his coworker to come and help him. Together they eventually secured the dog. They named the dog Yara and immediately took her to the hospital, she was in serious pain. Sadly, her leg was completely crushed so they had to cut it off.

But Yara was so brave as she tried to overcome her unfortunate situation. She learned how to trust humans again and began to open her heart to surrounding people. After recovery, she was taken to her foster home. She was now so happy in the new environment, having three legs did not slow her down.

Yara was still looking for a loving home. If you want to adopt her, please contact The Little Red Dog.

Please share this story with your beloved ones to help Yara find her home soon.

Injured Dog Left In The Snow Got Rescued By A Couple

Rescuers Head Out Looking For 2 Kittens, Only To Be Greeted By 100 Hungry Cats