Melissa Lambert didn’t want to adopt a dog. Her husband, Thom, had been willing to bring home a furry family member for years, but Melissa was not on board. However, she would frequently take her three daughters to their local animal shelter to give some love to the pets there, but she hadn’t thought to bring one home. That is, until she met Edgar.

Edgar is a brown and white Treeing Walker Coonhound, a handsome boy, or as Thom Lambert says, insanely handsome.

“Sweet demeanor. Great with the girls when they visited.” Melissa didn’t know what it was about Edgar that drew her to him, but she knew he belonged in her home. The sudden change of heart was a welcome surprise for Thom and he encouraged her to apply to adopt him. They didn’t know what a huge difference it would make.

Edgar settled into the Lambert family nicely. He fell in love with their daughters and proved to be laid back and quick to learn. 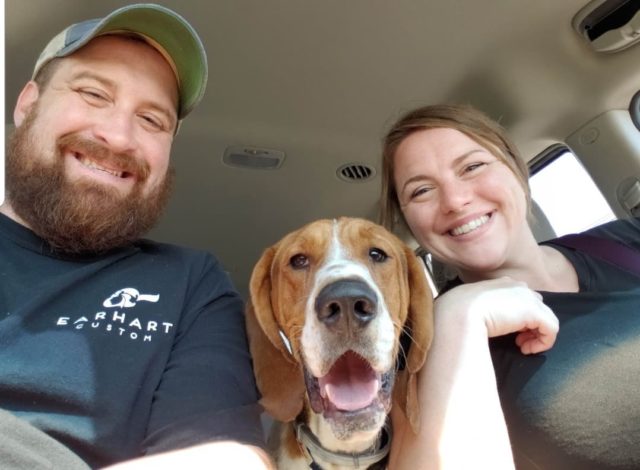 Not long after he moved into their home, Edgar proved to be more incredible than the family could have imagined.

On the night of April 28, the family arrived home after midnight from an out-of-town funeral. Thom and Melissa went upstairs to put their girls into their beds, and then settled themselves in their room with Edgar sleeping in his usual spot nearby. Only a few hours later, Edgar leapt to his feet and began barking like crazy. Thom described the episode to iHeartDogs:

“He awoke and started howl, growling. Like he never has before. It was with anger and violence in it. And that was unbelievably unlike him.” Edgar’s fit shocked Thom and Melissa, who say that he’s usually very calm. They had only seen something like this once before – the previous Wednesday and there was no explanation for it. But then Thom heard the footsteps in the kitchen downstairs.

Thom leapt into action, rushing into the kitchen and finding the windows and door wide open. He and his wife had made sure that everything was locked before bed. They had been more cautious with their home safety since the abduction of a little girl not far from where they live. The perpetrator had not been caught and with three little girls of their own, they made sure to be extra careful. 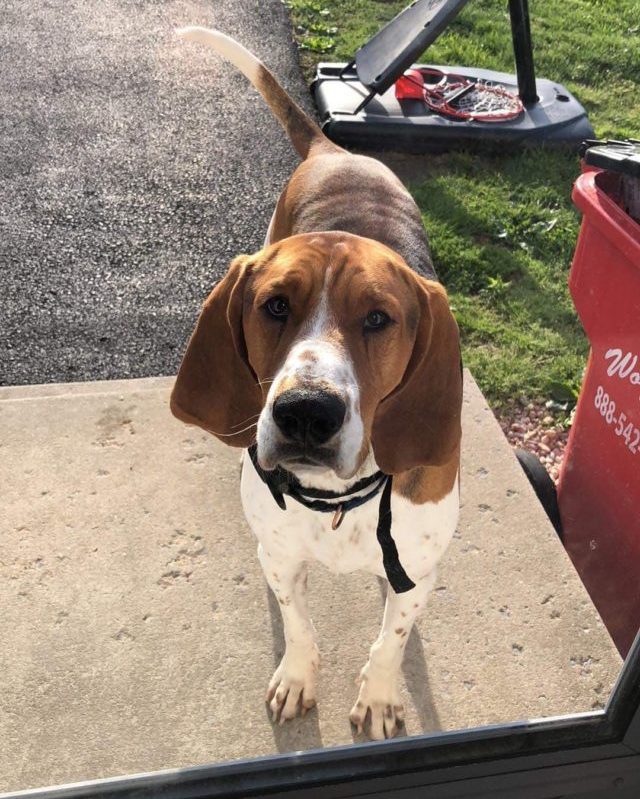 Taking two knives from the kitchen, Thom rushed upstairs to check on his daughters. All three were still in their beds. He woke them up, moved them into the bedroom with their mother and Edgar and, leaving Melissa with a knife, called 911 and checked the rest of the house to make sure the intruder was not still inside.

When police arrived they confirmed that no one else was in the house, and Thom told them that Edgar was the one who alerted him to something being wrong. The officers were surprised that the lazy-looking dog sleeping on the floor could be responsible for saving their family.

“He doesn’t seem like a guard dog. That’s just not in his wheelhouse.” 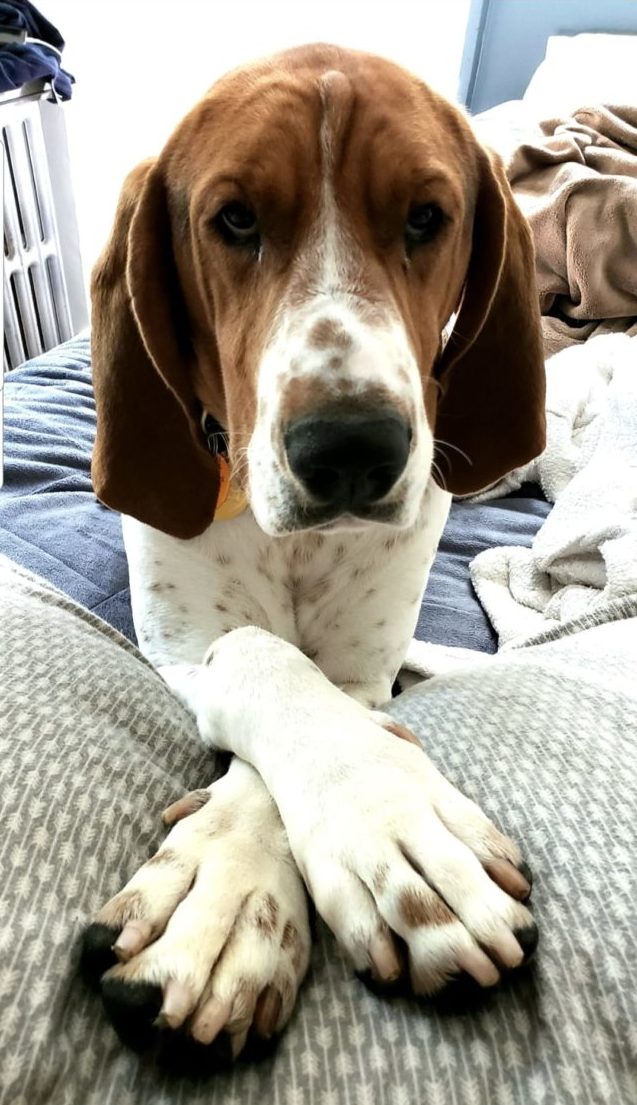 The next day police arrested a 20-year-old man who admitted to having been inside the Lambert’s home with the intention of abducting one of their daughters. He told police that he had been wandering the neighborhood, looking for children who seemed unsupervised, hoping to take one. When he entered the home he heard Edgar barking, and said that he recognized it as a warning from a dog who would protect his family – not the excited barking of a dog who wanted to meet him. The aggressiveness in Edgar’s voice sent him running out of the kitchen door, leaving the Lamberts’ girls safe in their beds.

And the last time that Edgar had acted out for no apparent reason? Police told Thom that the man had been at the house before. 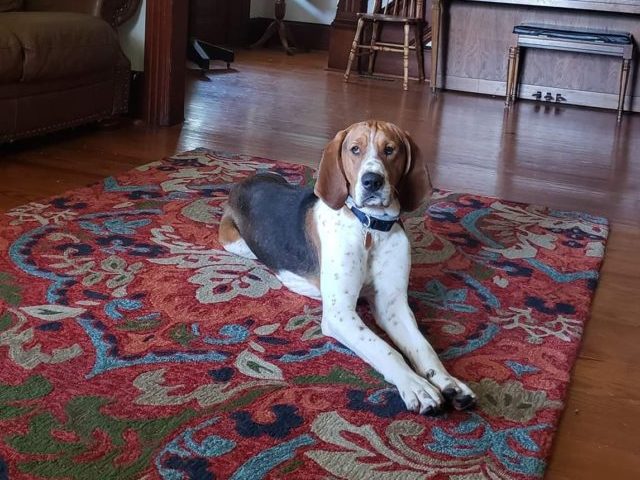 “He had only gone nuts like that the Wednesday night that week. And it was night the abductor took the other little girl. The police confirmed he was walking by our house that night via his confession. He wanted to come here first, but Edgar and I were still up. Thank. God.”

That night the man heard Edgar and decided to leave rather than risk coming face to face with the source of the bark. He took a 4-year-old girl from a different home instead – the one that prompted the Lamberts to take extra care with locking their windows and doors. She was bound with tape and put in a wooden box, but she somehow escaped when her abductor left for work. Because the girl was now out of his reach, he decided to try the Lamberts’ home again. Edgar saved them twice. 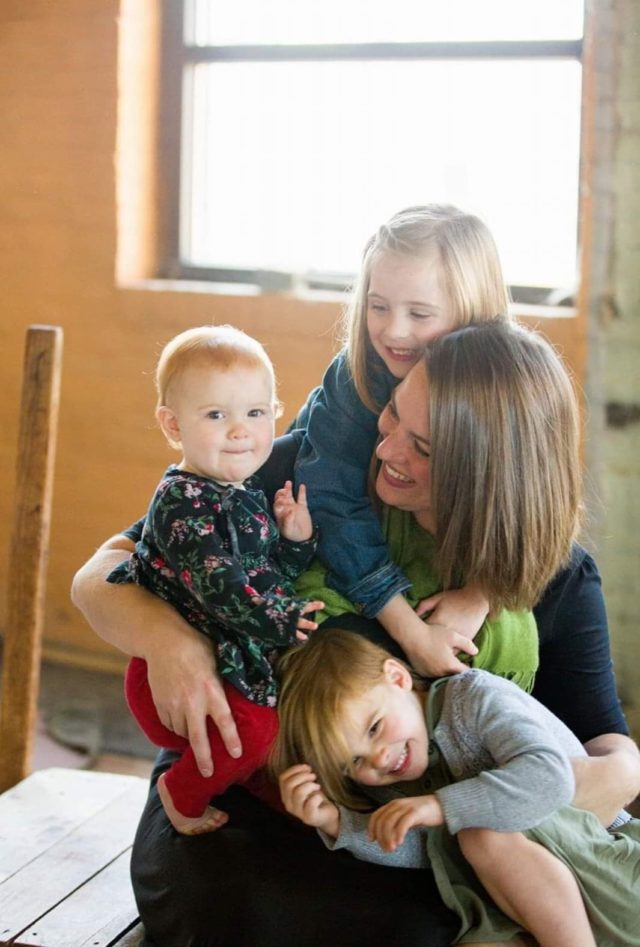 “If it were not for him waking us to make us aware someone was in our home, ours and daughter’s lives would be tremendously different. He will forever be one of my biggest heroes. He has come from a shelter dog, who was not adopted in West Virginia and sent to Antietam Humane Society, to the reason my girls are sleeping sound in their beds right now.”

This brave dog is being praised for his actions, most notably from PETA who are honoring him as a hero, and the Lambert girls’ school! Thom says the neighbors have been bringing him treats and he’s getting a lot of love from their community.

Thom wants to shift the focus of the awful event from what might have happened to what did – Edgar kept his children safe. He also helped bring justice for the other girl’s family and may have prevented even more attempts! “When you hear more details about what happened, it’s horrifying to consider. But the intruder’s mission failed and he was quickly apprehended. So I consider that a win.”

The timing for Edgar’s adoption couldn’t have been more perfect. Thom had always wanted a dog, but it must’ve been fate (or Melissa’s incredible intuition) that brought the right dog into their family at the right time.

“I wanted a dog SO BAD! The wife just never did. However, she fell in love with him first by taking our girls to the shelter and meeting him. And then day by day his seduction on her continued! I had been begging for a dog for 7 years! So when she came to me and said ‘I’m in love with a dog,’ I was shocked!

“It’s so damn impossible right now to think we got this dog for any other reason than it was meant to be. Everything had to happen in just the right way for him to be there at that moment.”

“Super Bonded” Dogs Were Tossed Out Of Car, They Waited In Same Spot For Weeks

Musician Drags Piano Up Mountain To Play For Blind Elephant

Hmong Puppy Is The Derpy Dog You Never Knew Existed

Soldier Forms A Bond With A Puppy While Being Deployed, But Bringing Her Back To The U.S. Wasn’t Easy