A brave police dog who has more than 1.7 million social media fans has been released from hospital after being shot twice in the line of duty.

Arlo, of the Thurston County (Washington) Sheriff’s Office K-9 unit, was injured during a vehicle pursuit on January 13.

Arlo suffered a shot to his leg and also a bullet that went into his shoulder and neck.

He was rushed straight to a local veterinarian clinic where he had surgery to be stabilized, but it was then discovered that one of the bullets was still lodged in Arlo near his spine. 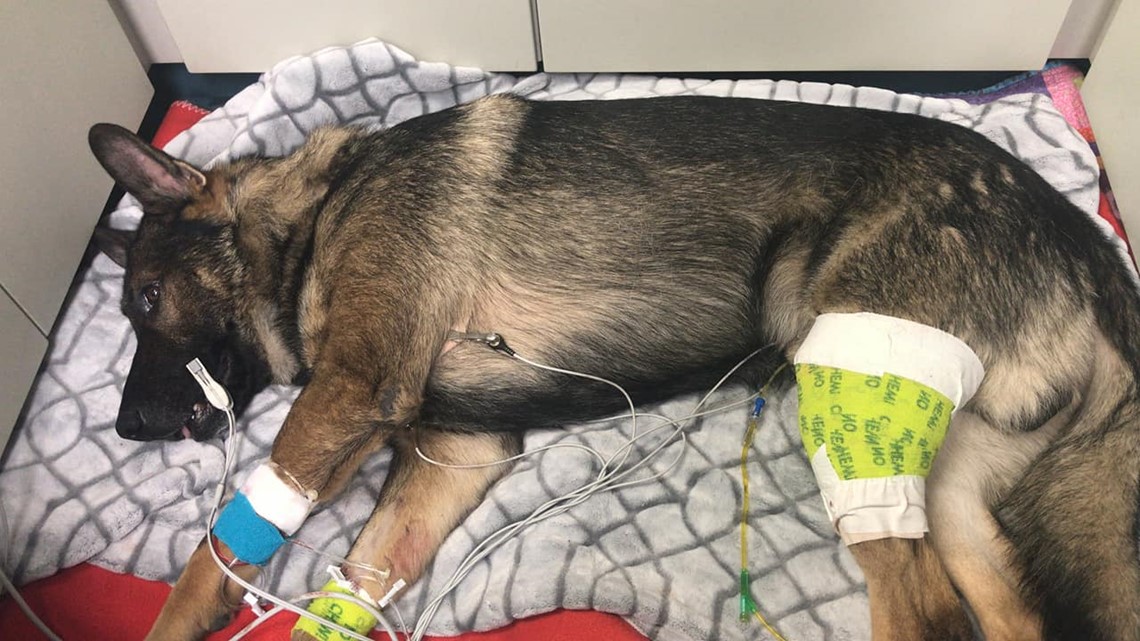 Thurston County Sheriff’s K9 to have surgery for bullet near spine after being shot in police chase | king5.com
Ahead of the operation on Friday morning, doctors gave Arlo only a 60 percent chance of survival.

“It’s a miracle that Arlo’s still alive,” Dr. Jen Warnock, the orthopedic veterinary surgeon who repaired the bone damage to Arlo’s vertebrae, said in a statement.

“The C6 vertebra was shattered; the bullet missed an artery that would’ve killed him by a millimetre; it could’ve destroyed his carotid artery.

“He’s unlucky but lucky at the same time.”

The video of him returning has been viewed nearly 50m times!

Arlo spent a few days recuperating at the hospital but then was brought back home via a police escort to Thurston County.

“Nearly the entire trip home K-9 Arlo and Deputy Turpin had a Police Escort with lights and sirens, starting from OSU by the OSU PD,” deputies wrote.

“When Deputy Turpin and K-9 Arlo arrived home, they were greeted by neighbors, friends, firefighters, fellow K-9 handlers from multiple organizations from local and surrounding counties and a multitude of law enforcement officers from all local agencies and surrounding county and police agencies.

It was quite humbling! Arlo is currently at home resting with his family.”

During the surgery, doctors needed to fuse Arlo’s C6 and C7 vertebrae with six screws and surgical cement.

The bullet near his spine had also mushroomed inside his body and dragged hair, dirt and debris deep into the tissue, meaning surgeons had to clean carefully to minimize the risk of infection.

“The shoulder that had all the bullet damage is the weakest,” Warnock said. “He’s still weak, but he’s improving by leaps and bounds.”

The K-9 unit at Thurston County is funded entirely through community donations. A GoFundMe page to help pay Arlo’s medical bills has raised more than $73,000.

“He lives for the job—all he wants to do is please Deputy Turpin and perform the job of a police K-9.”